The 201st Tactical Fighter Squadron, Also know as "Corvus Squadron" was first formed during the Usean Continental War and served Federal Erusian Air Force however defected towards the end of the war. The squadron also saw combat in the Circum-Pacific War assisting the legendary Ghost of Razgriz.

The 4 man squadron was created hours after Erusea declared war on ISAF their role was to lead the invasion from the air as well as to decimate as much of the ISAF air force. The squadron was made up of former belkan pilots so when they were not on the frontlines they were training new recruits, while the squadron was not well know comparied to the feared Yellow Squadron ISAF pilots knew the Corvus Squadron should not be taken lightly and often tried not to engage them. The squadron soon began to gain some fame as the they continued to shoot down aircrafts by the dozens as they headed to North Point the last line of defense for ISAF however other squadrons in the FEAF soon began to grow jealous of the squadron and a firece rivalry with almost every other squadron ensured.

Corvus Squadron was close to dealing the final blow on the remaining ISAF forces in North Point however after taking control of Rigley Air Base commanders believed sending bombers to the newly captured air base to finish off ISAF was more appropriate unfortunately Erusea's luck was going to run out...News of a new ace amongst the ISAF forces quickly spreaded when he shot down all bombers and escorts that was heading for ISAF's GHQ, after the failed bombing the tide of war changed drastically as the new ace know as The Ribbon Fighter as the war progressed Erusea got desprate and sent Corvus Squadron deep into enemy territory to destroy war factories and air force bases in hopes of slowing down the ISAF forces. On one covert mission the squadron was sent to attack weapon factories filled with civilians and the surrounding area to send a message to the ISAF forces however all members of Corvus Squadron were grimly reminded of a similar operation and couldn't bring themselves to attacking the city and turned back to base dispite disobeying orders they were spared of any disciplinary action because of their importance to the FEAF at the time. The squadron was sent to shoot down defectors however not willing to reduce themselves any further they defected themselves while it did take some time to convince the ISAF forces they were really defecting the squadron finally intergrated into the ISAF air force their first job....train more pilots.

Corvus Squadron soon was attached to the 118th Tactical Fighter Wing for the time being as the war was coming to an end and even participated in the assault on Megalith while their flight leader Mobius One took all the glory in the operation the squadron silently stepped out of the spot light and resumed training pilots and their long boring patrols. After the wars end Corvus Squadron grew tired of training and patrols however a year after the continentel war a group of military officers staged a rebellion agaist ISAF all across the Uesan continent in 2006 calling themselves Free Eusea Corvus Squadron was sent to support Mobius One. After Mobius One took down Free Erusea Corvus Squadron left ISAF and the Usean continent as a whole and moved to Osea where the Osean Air Defense Force were looking for pilots to strengthen their airforce. After being intergrated into the OADF in 2009 the squadron was temporarily disbanded to train pilots from different air bases while the squadron expressed their displeasure about the situation they still had to follow orders Corvus one being sent to Sand Island AFB,Corvus Two being sent to Heierlark AFB,Corvus 3 being sent to train with the 3rd Osean Naval Fleet , and Corvus Four being sent to McNealy AFB.

After Yuktobanian delcared war on Osea the members of Corvus Squadron were to report to Heierlark Air Force Base for redeployment however while waiting fo their superiors the sqaud along with rookies at the base gathered around for the stories the Wardog Squadron had to tell eventually the squadron was reformed and was sent to the front lines. there was some trust issues with other Osean squadrons because of their Belkan backround but dispite this Corvus Squadron became the second best squadron in all of the OADF right behind the Wardog Squadron. One day after returning from a patrol near McNealy AFB the base received a distress call from an AWACS in November City Corvus Squadron took off from McNealy before a plane crashed and blocked the runway however when the squadron was heading at November City transmission from the 8492nd Squadron told all squadrons to return to base claiming the distress call was a drill corvus squadron was suspicious of the transmission and continued to November City it turns out other squadrons nearby wanted to see if it was a drill themselves and were able to secure the airspace of any enemies leftover from the assault. While the Wardog Squadron was branded as Yuktobanian spies and later KIA Corvus Squadron took the spotlight and became the best in the OADF but as the war progressed the Osean advance stoped without the support of the Wardog Squadron not even the Corvus Squadron was able to help capture the Yuktobanian capital. When the missing Osean president and the missing prime minister of Yuktobania called for a immediate cease fire for both sides the squadron headed for Sudentor to help the The Ghost of Razgriz as they prepared to fly into the tunnel to destroy the SOLG's control panel. the squadron provided top cover for the Razgriz and prevented many enemy aircraft from following the Razgriz into the tunnels however a single aircraft managed to slip by. The Squadron was on the ground when they saw the SOLG's destrution at the hands of the Razgriz and like many others cheered and celebrated for the Razgriz's victory.

In the spring of 2011 a year after the Circum-Pacific war, Corvus Squadron was reformed into a aerobatic demonstration team consisting of 4 PAK FA that were specifically made for the squadron. Later that same year the squadron had the honor to fly the X-02 Wyvern, the ADFX-02 Morgan and the ADF-01 FALKEN at November City. For years Corvus Squadron continued to amaze both civilians and fighter pilots around the world until the winter of 2019 when Corvus Squadron's flight leader Edgar Starke retired from the OADF at the age of 42 soon after the rest of the squadron retired as well and then Corvus Squadron was disbanded. In 2020 General Resource and Neucom Inc started to take control countries weakened from war or economic troubles members from the squadron still having ties with the osean military and goverment warned that Osea could fall victim to GR and Neucom if they are not careful. In 2030 there was a unconfrimed report that a member of the Squadron joined UPEO as a flight instructed dispite the former pilot's old age. Once bright young recuits for the Belkan Air Force the members of Corvus flight finally stoped getting involved with politics and spent the remainder of their lives in north osea the little peice of their home's that has not been taken over by GR or Neucom 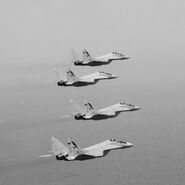 Corvus flying in formation during the Usean Continental War
Community content is available under CC-BY-SA unless otherwise noted.
Advertisement