"These guys are fast! They're not normal Lancers this time."
—Erusean pilot

The B-11 is the main specialized bomber aircraft of the Osean Air Defense Force along with the B-52H, B-1B and the B-2A . The B-11 is designed with high-payload tactical carpet bombing in mind. It can reach very high speeds in the air and enough to escape the MiG-31 Foxhound. Though its lack of maneuverability makes it somewhat vulnerable to hostile fighters.

In the 1995, the Osean military realized that the B-52H is too slow and less maneuverability and can get shot down easily by enemy fighters. The B-1B Lancer were very successful at the time due to its high speed and can outrun hostile forces easily. Due to its success, Osea wants to build more B-1B and the better version of the B-1B, the B-11 Super Lancer was created.

Unlike its cousin, the HB-106 Blackjack, this bomber has a greater variety of weapons and is designed with low-altitude bombing runs in mind. It generally flies low and fast to avoid radars, making it apt for hit-and-run tactics. Its weapon variety also makes it a valuable asset in naval combat, giving it plenty of ways to hit enemy vessels. 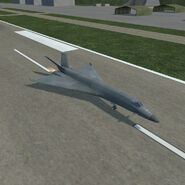 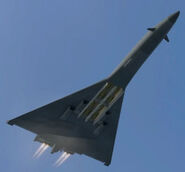