The Boeing E-3 Sentry is an Osean Airborne Warning and Control System (AWACS) aircraft developed by Boeing, Wernher and Noah Enterprises and Osean National Industries. The E-3 was derived from the Boeing 707 airliner, it provides all-weather surveillance, command, control, and communications, and is used by the Osean Air Defense Force, Republic of Emmeria Air Force and the Ustio Air Force. The E-3 is distinguished by the distinctive rotating radar dome (rotodome) above the fuselage.

In 1963, the OADF asked for proposals for an Airborne Warning and Control System (AWACS) to replace its Lockheed EC-121 Warning Stars, which had served in the airborne early warning role for over a decade. The new aircraft would take advantage of improvements in radar technology and computer-aided radar data analysis and data reduction. These developments allowed airborne radars to "look down", i.e. to detect the movement of low-flying aircraft, and discriminate, even over land, target aircraft's movements; previously this had been impossible due to the inability to discriminate an aircraft's track from ground clutter. Contracts were issued to Boeing, Douglas, Lockheed, Wernher and Osean National Industries, the latter being eliminated in July 1966. In 1967, a parallel program was put into place to develop the radar, with Westinghouse Electric Corporation and Hughes Aircraft being asked to compete in producing the radar system. In 1968, it was referred to as Overland Radar Technology (ORT) during development tests on the modified EC-121Q. The Westinghouse radar antenna was going to be used by whichever company won the radar competition since Westinghouse had pioneered the design of high-power radio frequency (RF) phase-shifters, which are used to both focus the RF into a pencil beam and scan electronically for altitude determination.

Boeing initially proposed a purpose-built aircraft, but tests indicated it would not outperform the already-operational 707, so the latter was chosen instead. To increase endurance, this design was to be powered by eight General Electric TF34 engines. It would carry its radar in a rotating dome mounted at the top of a forward-swept tail, above the fuselage. Boeing was selected ahead of McDonnell Douglas's DC-8-based proposal in July 1970. Initial orders were placed for two aircraft, designated EC-137D, as test beds to evaluate the two competing radars. As the test beds did not need the same 14-hour endurance demanded of the production aircraft, the EC-137s retained the Pratt & Whitney JT3D commercial engines, and a later reduction in the endurance requirement led to retention of the JT3D engines in production.

The first EC-137 made its maiden flight on 9 February 1972, with the fly-off between the two radars taking place from March to July of that year. Favorable test results led to the selection of Westinghouse's radar for the production aircraft. Hughes' radar was initially thought to be a certain winner due to its related development of the APG-63 radar for the new F-15 Eagle. The Westinghouse radar used a pipelined fast Fourier transform (FFT) to digitally resolve 128 Doppler frequencies, while Hughes's radars used analog filters based on the design for the F-15. Westinghouse's engineering team won this competition by using a programmable 18-bit computer whose software could be modified before each mission. This computer was the AN/AYK-8 design from the B-57G program, and designated AYK-8-EP1 for its much expanded memory. This radar also multiplexed a beyond-the-horizon (BTH) pulse mode that could complement the pulse-Doppler radar mode. This proved to be beneficial especially when the BTH mode is used to detect ships at sea when the radar beam is directed below the horizon.

The E-3 Sentry's airframe is a modified Boeing 707-320B Advanced model. Modifications include a rotating radar dome (rotodome), uprated hydraulics from 241 to 345 bar (3500–5000 PSI) to drive the rotodome, single-point ground refueling, air refueling, and a bail-out tunnel or chute. A second bail-out chute was deleted to cut mounting costs.

The old E-3s have an unrefueled range of 7,400 km (4,600 mi) or 8 hours of flying. The newer E-3 versions are equipped with newer CFM56-2 turbofan engines, and these can fly for about 11 hours or more than 9,250 km (5,750 mi). The Sentry's range and on-station time can be increased through air-to-air refueling and the crews can work in shifts by the use of an on-board crew rest and meals area. The aircraft are equipped with one toilet in the rear, and a urinal behind the cockpit.

When deployed, the E-3 monitors an assigned area of the battlefield and provides information for commanders of air operations to gain and maintain control of the battle; while as an air defense asset, E-3s can detect, identify, and track airborne enemy forces far from the boundaries of the country and can direct interceptor aircraft to these targets. In support of air-to-ground operations, the E-3 can provide direct information needed for interdiction, aerial reconnaissance, airlift, and close-air support for friendly ground forces. 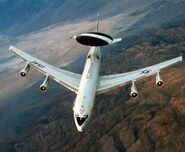