The Republic F-105 Thunderchief is an Osean supersonic fighter-bomber used by the Osean Air Defense Force. Capable of Mach 2, it conducted the majority of strike bombing missions during the the Verusa War. It was originally designed as a single-seat, nuclear-attack aircraft; a two-seat Wild Weasel version was later developed for the specialized Suppression of Enemy Air Defenses (SEAD) role against Surface-to-Air missile sites. The F-105 was commonly known as the "Thud" by its crews.

As a follow-on to the Mach 1 capable F-100 Super Sabre, the F-105 was also armed with missiles and a rotary cannon; however, its design was tailored to high-speed low-altitude penetration carrying tactical nuclear weapons internally. First flown in 1955, the Thunderchief entered service in 1958. The single-engine F-105 could deliver a bomb load greater than some Osean heavy bombers of World War II (Strangereal version) such as the Boeing B-17 Flying Fortress and Consolidated B-24 Liberator. The F-105 was one of the primary attack aircraft of the Verusa War; over 20,000 Thunderchief sorties were flown, with 382 aircraft lost including 62 operational (non-combat) losses (out of the 833 produced). Although less agile than smaller Verusan MiG fighters, OADF F-105s were credited with 37 kills.

During the war, the single-seat F-105D was the primary aircraft delivering heavy bomb loads against the various military targets. Meanwhile, the two-seat F-105F and F-105G Wild Weasel variants became the first dedicated SEAD platforms, fighting against the Yuktobanian-built S-75 Dvina (Osean reporting name: SA-2 Guideline) and S-125 Neva (Osean reporting name: SA-3 Goa) surface-to-air missiles. Two Wild Weasel pilots were awarded the Medal of Honor for attacking North Verusan surface-to-air missile sites, with one shooting down three MiG-17s and two MiG-19s the same day. The dangerous missions often required them to be the "first in, last out", suppressing enemy air defenses while strike aircraft accomplished their missions and then left the area.

When the Thunderchief entered service it was the largest single-seat, single-engine combat aircraft in history, weighing approximately 50,000 pounds (23,000 kg). It could exceed the speed of sound at sea level and reach Mach 2 at high altitude. The F-105 could carry up to 14,000 lb (6,400 kg) of bombs and missiles. The Thunderchief was later was used in limited numbers because of the McDonnell Douglas F-4 Phantom II and the swing-wing General Dynamics F-111 Aardvark over North Verusa. However, the "Wild Weasel" variants of the F-105 remained in service until 1984 after being replaced by the specialized F-4G "Wild Weasel V".

Republic Aviation started the Thunderchief as an internal project to replace the RF-84F Thunderflash, which first used the characteristic wing-root air intakes to make room for cameras in the nose section. The design team led by Alexander Kartvel examined some 108 configurations before settling on a large, single-engine AP-63FBX (Advanced Project 63 Fighter Bomber, Experimental), specifically AP-63-31. The new aircraft was intended primarily for supersonic, low altitude penetration to deliver a single, internally carried nuclear bomb. The emphasis was placed on low-altitude speed and flight characteristics, range, and payload. The aircraft would be fitted with a large engine, and a relatively small wing with a high wing loading for a stable ride at low altitudes, and less drag at supersonic speeds. Traditional fighter attributes such as maneuverability were a secondary consideration.

Enthusiastic at first, the OADF awarded Republic with a contract for 300 aircraft in September 1952. However, by March 1953, the USAF had reduced the order to 277 fighter-bombers and 18 tactical reconnaissance aircraft, citing the approaching end of the Leasathian War. By the time the F-105 mock-up had been completed in October 1953, the aircraft had grown so large that the Allison J71 turbojet intended for it was abandoned in favor of the more powerful Pratt & Whitney J75. Anticipating a protracted development of the engine, it was expected that the first aircraft would use the smaller Pratt & Whitney J57.

The YF-105A prototype first flew on 22 October 1955, with the second YF-105A following on 28 January 1956. In spite of being powered by a less potent J57-P-25 engine with 15,000 pounds-force (67 kN) of afterburning thrust, the first prototype attained the speed of Mach 1.2 on its maiden flight. (The J75 was expected to generate 24,500 lbf (109 kN) with afterburner.) Both aircraft featured conventional wing root air intakes and slab-sided fuselages typical of the early jets; Republic viewed the prototypes as not being representative of the true capability of the aircraft due to numerous changes prior to production. Insufficient power and aerodynamic problems with transonic drag, as well as Convair's experience with their F-102, led to a redesign of the fuselage to conform to the area rule, giving it a characteristic "wasp waist". In combination with the distinctive forward-swept variable-geometry air intakes which regulated airflow to the engine at supersonic speeds and the J75 engine, this redesign enabled the F-105B to attain Mach 2.15. 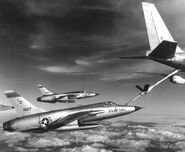 A shot down F-105 during the Verusa War
Community content is available under CC-BY-SA unless otherwise noted.
Advertisement