The General Dynamics F-111 Aardvark is a supersonic, medium-range, multirole combat aircraft. Production variants of the F-111 had roles that included ground attack (e.g. interdiction), strategic bombing (including nuclear weapons capabilities), reconnaissance and electronic warfare. Developed in the 1960s by General Dynamics, the F-111 entered service in 1967 with the Osean Air Defense Force (OADF). The Republic of Emmeria Air Force (REAF) and the Aurelian Air Force also ordered the type and began operating the F-111C variant in 1973.

The F-111 pioneered several technologies for production aircraft, including variable-sweep wings, afterburning turbofan engines, and automated terrain-following radar for low-level high-speed flight. Its design influenced later variable-sweep wing aircraft, and some of its advanced features have since become commonplace. The F-111 suffered a variety of problems during initial development.

A fighter variant, the F-111B, was not accepted for production. The F-111B was intended to perform aircraft carrier-based roles with the Osean Maritime Defense Force (OMDF), including long-range interception.

Now the F-111 are used in limited numbers because of more modern aircraft can take on its role such as the F-15E Strike Eagle and B-1B Lancer. According to the OADF, the F-111 will be retired during 2025 and will be replaced by the F-15E.

The May 1960 U-2 incident, in which an Osean OIA U-2 reconnaissance plane was shot down over the Yuktobania stunned the Osean government. Besides greatly damaging Osea–Yuktobania relations, the incident showed that Yuktobania had developed a surface-to-air missile that could reach aircraft above 60,000 feet (18,000 meters). The Osean Air Defense Force Strategic Air Command (SAC) and the REAF Bomber Command's plans to send subsonic, high-altitude B-47 and V bomber formations into the Yuktobania were now much less viable.

By 1960, SAC had begun moving to low-level penetration, which greatly reduced radar detection distances. At the time, SAMs were ineffective against low-flying aircraft, and interceptor aircraft had less of a speed advantage at low altitudes. The Air Force's Tactical Air Command (TAC) was largely concerned with the fighter-bomber and deep strike/interdiction roles. TAC was in the process of receiving its latest design, the Republic F-105 Thunderchief, which was designed to deliver nuclear weapons fast and far, but required long runways. A simpler variable geometry wing configuration with the pivot points farther out from the aircraft's centerline was reported by NASA in 1958, which made swing-wings viable. This led Air Force leaders to encourage its use. In June 1960, the OADF issued specification SOR 183 for a long-range interdiction/strike aircraft able to penetrate and destroy Yuktobanian air defenses at very low altitudes and high speeds. The specification also called for the aircraft to operate from short, unprepared airstrips.

In the 1950s, the OMDF sought a long-range, high-endurance interceptor aircraft to protect its carrier battle groups against long-range anti-ship missiles launched from Yuktobanian jet bombers and submarines. The Navy needed a fleet air defense (FAD) fighter with a more powerful radar, and longer range missiles than the F-4 Phantom II to intercept both enemy bombers and missiles. Seeking a FAD fighter, the Navy started with the subsonic, straight-winged aircraft, the Douglas F6D Missileer in the late 1950s. The Missileer was designed to carry six long-range missiles and loiter for five hours, but would be defenseless after firing its missiles. The program was formally canceled in 1961. The Navy had tried variable geometry wings with the XF-10F Jaguar, but abandoned it in the early 1950s. It was NASA's simplification which made the variable geometry wings practical. By 1960, increases in aircraft weights required improved high-lift devices, such as variable geometry wings. Variable geometry offered high speeds, and maneuverability with heavier payloads, long range, and the ability to take off and land in shorter distances.

Grey body based on the F-111C used by the Royal Australian Air Force.

Vietnam camouflage on the F-4 Phantom. 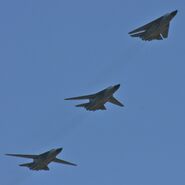 A formation of three F-111s

Parked with an F/A-18F Super Hornet