"A multipurpose fighter produced using a JSF (Joint Strike Fighter) design. While able to use a variety of weapons in air-to-air and ground-to-ground combat, the procurement cost for this stealth fighter is more manageable than the original F-35. In accordance with its utility, there are multiple types available. The aircraft have a capable of STOVL (short takeoff/vertical landing) capable. Its nickname is "Ghost"."
—Hangar

The F-45A Ghost is a sleek aircraft available to the Osean Air, Maritime force and Marine Corps. Designed with stealth engagement in mind. It is intended primarily for Air-to-Ground combat, but it has an integrated radar equipped and can handle Air-to-Air combat as well. The aircraft has an integrated internal weapons bay, allowing it to store its munitions inside the aircraft until needed. This has two main implications for the F-45A: it decreases drag across the aircraft, allowing it to reach higher In-Air Speeds, while also decreasing its radar cross-section as well, letting it both move closer to a radar source before detection and escape radar-locks more easily through conventional evasive maneuvers.

The F-45A is arguably one of the most specialized aircraft in the Osean military, intended almost exclusively for use in stealth-oriented roles along with the F-35 Lightning II for its very similar design. It was created in response to the growing threat of hostile air defenses, especially where stronger Air-to-Air missile such as the R-73 (AA-11 Archer) for Erusean aircrafts and modern ground radars and SAM launchers were concerned. It is designed with pop-up attacks in mind, striking nearby targets before dipping back into cover or even striking targets from behind it. Even though it is not capable of equipping any Anti-Radiation Missiles, the F-45A can be a deadly asset in SEAD ops due in part to its aptitude in the area of evading radar-guided missiles. In scenarios where stealth is not required, though, the F-45A has the capacity to fit six extra pylons on its wings, allowing it to function as a versatile assault aircraft as well when needed.

In stealth-oriented roles, maneuverability and mobility are going to be key assets to an aircraft for remaining undetected when needed. As such, the F-45A has full VTOL capability. It can vector its thruster to 90 degrees to hover in a single place for extended periods of time, take off and land from smaller areas like helipads, or even for making strafing runs against ground targets.

During the 1990s, the Osean military need more aircrafts while the threat from Belka increasing. They need an aircraft to replace the old carrier-based F-14D Super Tomcat and the VTOL AV-8B Harrier II, while more aircraft carriers were made. Lockheed Martin and Wernher begins developing the new carrier-based aircraft with the help of Macmillan Heavy Industries and the F-45A along with the F/A-26A was released. The F-45A was used in limited numbers in the Belkan War because of the F/A-26A. But later the F-45A has shown its power during the Circum-Pacific War and the Lighthouse War.

The Yuktobanian and Erusean Army was no matched with the F-45A, giving them another fear along with the F/A-26A Wasp and the A-10 Thunderbolt II. The F-45A was also very popular during the Lighthouse War, especially by the Osean Navy, while its not popular as the F/A-26A for the higher cost for the stealth capabilities, its still a popular choice for the Osean military. On July 26, 2019, a large group of F-45As and F/A-26As attacked a large Erusean base near Anchorhead, showing its power by taking out all the new Erusean S-400 and S-500 Surface-to-Air Missile systems and crippled the Erusean forces. 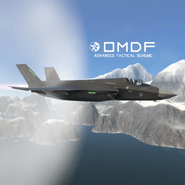