"Stay sharp, those guys are real wasp"
—Russel Faulkner commenting on the F/A-26A during a battle with Triton Team

The F/A-26A "Wasp" is a twin engine multirole fighter aircraft. It is known for its sheer armament capacity, giving it the ability to equip a myriad of different weapons while still maintaining an acceptable Thrust to Weight Ratio. It is designed for Air-to-Air combat, but it is equally capable of Air-to-Ground combat as well. It serves as one of the most common fighters in the Osean Air Defense Force, being nearly essential for large-scale air-based offensives of the Osean Air Defense Force.

The F/A-26A has a superior thrust power and weapon capacity, allowing it to bring much more weapons into battle than its siblings. Its radar inclusion enables it to function as an Air-Superiority Fighter in battle, fighting off hostile interceptor aircraft to ensure that its allies can safely serve their own purposes in battle. It is capable of deploying the powerful mid-long-range AIM-120 AMRAAM for Beyond Visual Range (BVR) engagements along with other short-range Anti-Air missiles, such as the AIM-9 Sidewinder, making it a formidable threat to other aircraft from any range.

Additionally, it is capable of equipping many powerful Air-to-Ground weapons, such as the SPEAR-3 and Mk. 82 Bomb, allowing it to occupy ground forces as well if needed. Unlike other aircraft, though, the F/A-26A does not have an integrated Targeting Pod (TGP) and it must have one equipped in the Armament screen before it can use Air-to-Ground Missiles. In the context of Close Air Support (CAS), the F/A-26B is apt for hit-and-run attacks, dropping a payload onto ground forces before flying out of their range again. Its Air-to-Ground Missile (AGM) capacity also gives it the ability to undertake the potentially-dangerous role of Suppression of Enemy Air Defenses (SEAD). Among its repertoire of Air-to-Ground Missiles is the fearsome AGM-88 Anti-Radiation Missile, which can be deployed against hostile Surface-to-Air Missile (SAM) Radars from a reasonable distance to cripple hostile surface-based air defenses.

In the 1980, Osea begins developing various aircrafts and military armaments to prepare for a war could start from Yuktobania.

In 1985, Osea starts combining the F-15C Eagle and the F-15E Strike Eagle, allowing a fighter could capable of bringing both Air-to-Ground and Air-to-Air weapons. Wernher and Noah Enterprises combines the F-15C and the main fuselage of F-15E. And the F/A-26A was created. The F/A-26A was very popular and a fear for the Yuktobanian and Belkan Army during the Circum-Pacific War and the Belkan War in 2010 and 1995 by its powerful Air-to-Ground weapons such as the Mk.82 and the SPEAR 3 missile. The F/A-26A was also used by the ISAF Air Force and Navy, also created a fear for the Erusean forces. Later the F/A-26A was use by various squadrons in the Lighthouse War in 2019, and created another large threat for the Erusean Army.

In July 26, 2019. A large numbers of F/A-26A and F-45A strike a large Erusean base near Anchorhead. The F/A-26A power was immediately prove its power by dodging all the new Erusean S-500 Surface-to-Air missile and cause high damage to the Erusean Army.

Ace Combat 8: The Fall of Erusea

"A carrier based air-superiority fighter that can be configured for ground attack roles."
—Hangar description 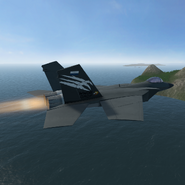 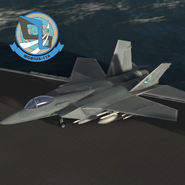