This article is a stub. You can help Ace Combat Fanon Wiki by expanding it.

The GAV-14 Buzzard is a subsonic light Close Air Support (CAS) aircraft and advanced trainer developed by the Osean National Industries and Axe and Hammer Industries. In 2003, the Ustio Air Force fleet of 180 GAV-14s was reduced to 127 due to budget constraints. After the Belkan War, the Ustian government has re-sold most of the redundant aircraft to both military and civilian operators.

The GAV-14 has seen active combat use by the Yuktobanian Air Force against the OADF. The aircraft was pretty effective especially dealing against SAMs and MANPADS during close air support missions due to its high maneuverability, but can still be vulnerable to Osea's modern MIM-104 Patriot SAM system or modern air-to-air missiles such as the AIM-9X Sidewinder (QAAM) and the AIM-120 AMRAAM (XMAA).

The Buzzard is a low-set, straight wing jet-powered aircraft with a double-taper planform. It is designed to be a low-cost aircraft capable of performing both ground attack and air interdiction missions.

The Buzzard can be outfitted to use either an AA (Air-to-Air) or CAS (Close Air Support) loadout, with each variant carrying armament suited for their respective missions.

By default, both variants are armed with a twin-barrelled 25 mm cannon that is loaded with 2800 rounds of high-explosive (HE) shells.

Semi-stealthed by virtue of its design, the Buzzard is a flexible light plane which can fulfil either air-to-ground or air-to-air roles thanks in part to its comprehensive loadout options. It is also slingloadable by heavy-lift helicopters, allowing stranded or disabled Buzzards to be airlifted for repairs.

The CAS variant of the Buzzard also retains an integrated laser designator which can be used to provide self-designation for its guided payloads.

However, it should be noted that the Buzzard's laser designator is only functional on the CAS variant. Neither the default Buzzard nor the AA variant have a usable laser marker, although the pilot camera on both variants can still be controlled to lock-on to lasers being marked by other sources.

The Buzzard has fairly average performance in all aspects. Though it has better maneuverability and speed than the Wipeout, it isn't a true CAS jet even with its ground attack loadouts.

Furthermore, the Buzzard's sensor suite can be described as normal. Its active radar pales in comparison to other Osean aircraft maximum range-wise, and it also cannot be armed with AIM-260 JATM long-range missiles. Its only long range A2A missile is the AIM-120D AMRAAM (The long-range variant of the standard AIM-120) and the AIM-7 Sparrow which is semi-active and not suitable for close dogfight. Lastly, the Buzzard technically retains only six pylons as the seventh can only mount the 25 mm cannon. 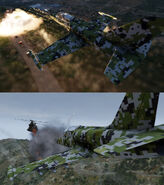