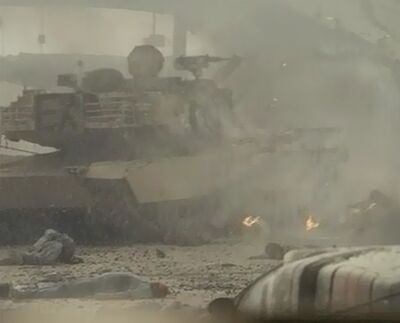 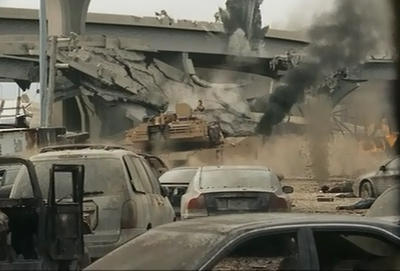 The M1A1 Abrams main battle tank was developed by General Dynamics. It is a further development of the M1P Abrams. The M1A1 was revealed in 1985 with production commencing the same year. It entered service with Osean Army in 1986. Production ended in 1994-96 and approximately 9,000 M1A1 Abrams tanks were built. This main battle tank is currently in service with Osea, Erusia, Aurelia, Wellow, Wielevakia, Ustio, and Leasath.

The M1A1 has an improved armor protection comparing with it's predecessor, the M1P. Front turret and hull armor of the M1A1 features advanced composite armor reinforced with depleted uranium mesh for better protection. Like in the previous version ammunition is stored in the turret bustle with blow-out panels for better survivability and crew protection. Interior is lined with Kevlar for protection against spalling. Some tanks, most notably of the Osean Marine Corps, are fitted with a missile countermeasure device. This device can detect and jam guidance systems of laser-guided missiles.

One of the most important improvement over the M1 is the M256 120-mm smoothbore gun, originally developed by Rheinmetall and produced in Osea under license. The same gun is fitted on the Leopard 2 up to the version of the 2A5. This gun is loaded manually. Ammunition load was decreased to 40 rounds due to larger projectile size. The M1A1 Abrams has a range of effective fire in excess of 4 km, which was successfully demonstrated during the Belkan War in 1995.

A special M829A2 armor-piercing round was developed for the M1A1 to counter threat possessed by latest at that time Yuktobanian/Belkan MBTs, such as the T-80U and T-90, witted with Kontakt-5 explosive reactive armor. Currently the MRM-KE or Mid Range-Munition Kinetic Energy round is under development. It is a gun-launched projectile with rocket assistance on the final stage. It will have a maximum effective range of fire in excess of 12 km and will use kinetic energy warhead.

Vehicle is powered by Avco Lycoming (now Honeywell) AGT1500 gas turbine engine, developing 1 500 horsepower. It is a multi-fuel engine, which can run on kerosene, diesel, petrol or aviation fuel. It has servicing intervals significantly longer than of diesel engines, however is troublesome to maintain and has very high fuel consumption comparing with diesel fueled engines. The AGT1500 engine can be replaced in field conditions within 30 minutes. The chassis and transmission of the M1A1 was improved to coupe with increased tank's weight. This main battle tank can be equipped with mine plow or mine rollers.

M1A1 Abrams main battle tanks were produced in Leasath under license, however Leasath vehicles have composite armor without depleted uranium mesh of the Osean tanks. The Leasath Army operates 555 of these vehicles.

This article is a stub. You can help Ace Combat Fanon Wiki by expanding it.