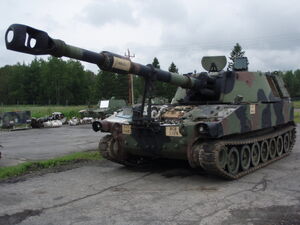 This heavy howitzer was modernized by the Democratic Federation of Wellow. To enhance survival in battle, the armor has been strengthened for 20cm with DU armor, and was added a 7.62mm FN MAG LMG on the tower. Other upgrades include a optional chassis, and turret modification, a new Emmerian built 155mm gun, and a new Cummins diesel engine. The 155mm M185 main artillery gun was modified to use napalm shells, high explosive, and.. anti aircraft flak shells. This howitzer has a crew of 6: the section chief, the driver, the gunner, and two ammunition handlers. The gunner aims the cannon left, the assistant gunner aims the cannon up and down. This variant of the M109A5 is also license produced in Leasath, Wellow, and Aurelia due to it's performance. Due to it's modification, it closely resembles the Emmerian made AS-90.