Pat was born in North Point on March 22nd, 1973 to a Belkan mother and a Usean father. At an early age, he fell in love with aircraft, witnessing a demonstration of a brand new Osean F-16 in 1976. By 16, he had his private pilot's liscense. Dunn graduated from NewField Highschool No. 77 in 1991, and attempted to join the USEA Air Force that year, but a knee injury prevented his military career from unfolding.

Depressed, Pat turned to the west coast's Erusean Air and Space Administration. There, he was accepted due to his outstanding high school record and flight experience. He was able to become a test pilot for new aircraft including the new F-15S/MTD demonstrator. In 1995, Dunn was sent overseas to attempt to sell aircraft to a fledgling ex-Yuktobanian territory, Kaluga. It was there he was thrust into combat and where he met a good friend of his, Scarface 1. On the morning of October 7th, the airport Dunn was based at came under attack by rebel forces, and he was caught up in a crowd of scurrying pilots. Attaining his flight gear, he scrambled to the nearest armed fighter; an F-15A Eagle. As STFS rolled out to intercept incoming bombers, Pat joined them, offering aid. It was granted that he would be temporarily part of the squadron in that operation. On that day, Dunn gained his first kill on a terrorist forces AV-8B Harrier.

That night after landing, he and the rest of the STFS Scarface were welcomed as heroes. However, as much as he wanted to stay with the squadron, Dunn was ordered back to EASA's headquarters in Usea. He feared the worst when the chairman called him to his office. There, two other foreign pilots sat. The chairman went on to describe the trio's actions: One was an Estovakian Air Force Pilot recruited by the EASA for his mercenary actions in the Belkan War by the name of Jasska Zaikev. The other was an extremely young Belkan pilot, about the age of 20. His name was Sam Fuller- selected for his tolerance to high-G forces.

Suddenly, a Usean Colonel by the name of Ulrich Olsen enterred the room. After talk with the chairman for a few moments, he exited. What came to the three pilots was a shocker: They were now part of a privately funded fighter squadron under the USEAN 37th Mercenary Air Force. The designation for these contracted squadrons was "Special Tactical Fighter Squadron" or STFS.

Ironically, the 77th squadron, as they were now called, were paired up with the 92nd (often simply called 1st to coincide with the fact that they were the first STFS) STFS "Scarface" to form the 18th fighter wing. Dunn was overjoyed to be able to fight alongside the friends he had made in Kaluga, who had recently returned after destroying the Terrorist force's Flying Fortress.

Dunn and his squadron: now dubbed "Cerberus" for it's signature 3 fighters (3 for each "head" of the legendary Cerberus) aided the STFS in several operations during the Usean rebellion of 1998, and took on operations ('A'lphaville and 'B'ellisima) that the 92nd was unable to take on due to constraints.

Rebelling against Neucom and Possible Death

In 2020, the EASA was bought out by Neucom Inc. Dunn, now in his 40's was strongly against this turn to a powerful corporation and left the company. As the nations of the world were bought out, Pat created a private militia called "Free Usea" to carry out acts to defend his nation from the benevolent corporate powers now taking over the world. By 2040, the aging ace was pushing himself, and his dated aircraft were no longer suitable. However, he often aided UPEO in it's fight against these forces. Now flying an F/A-32C, Cerberus One continued to take to the air. As the war drew to a close, he failed to return and was classified by UPEO officials as MIA, presumed dead.

In 2048, however, an old man with Dunn's description was spotted at the now abandoned Rigley Air Force base. After fueling a vintage XF/A-27 he took off, disappearing on radar moments later.

Cerberus 1 is rather tall compared to average pilots, about 6'3". He has bright blonde hair and icy blue eyes, highlighting his Belkan heritage. His fiery, but honorable personality has earned him the callsign "Broadsword", for he follows the code of the Belkan knights and never attacks someone who "doesn't have it coming". 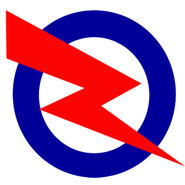 Cerberus 1's personal emblem. It's origin or relevance to him is unknown, but it has been seen on the tail of his XFA-27 and on the side of his helmet.

An artist's rendition of Broadsword wearing what appears to be a symbolic silk flyer's scarf.