"Pregrada" was the codename for Yuktobanian's Self defense initiative (Initsiativa samooborony) as a response to Osea's Strategic Defense Initiative or SDI during the cold war. This initiative marked the peak of cold war and gave birth to many never before seen experimental weapons and some made into the production line and become part of Yuktobanian Military. Military projects within "Pregrada" were focused on the development of Ground, Naval, Aerial conventional weaponry and strategic inconventional weaponry.

ZA-2 is the biggest main battle tank in modern history, Development started in the 1978, when the design bureau of the National Munition Factory (NZB) developed a new design of heavy main battle tank. A prototype was made under the codename: Type 79 and demonstrated to high ranking Yuktobanian military officers in Amur Proving Ground. But, the project was laid down in 1979 until its revival in 1980 under "Pregrada" and renamed ZA-2 Korol Sneg after the 2 National Munition Factory engineers who first came up with the idea. ZA-2 is equipped with very tick front armor made of top secret material and an explosive reactive armor on the hull and turret. The basic variant of ZA-2 still uses the carousel-style autoloader.

UYR: Yuktobania operates 420 ZA-2 by 1986 but due to production and maintenance cost only 200 remains by 2014 and its position as main battle tank was replaced by much easy to produce and more agile T-90 variants.

Federal Republic of Estovakia: Estovakia ordered 10 ZA-2S in 1996 and all still remain in active service and involved in Estovakian Civil War as part of General Dvornik's Army and also took part in the invasion of Gracemeria in 2015

LT1K1 Tank was Yuktobania experimental self-propelled laser vehicle. The platform used T-72 Chassis with a battery of laser projectors mounted in the turret. The original purpose of this platform was to disable the optical-electronic equipment of enemy missiles, ground and aerial vehicles. But, in 1985 the NZB planned for another platform codename LT1K2 "Rubin" equipped with a much stronger laser beam to annihilate enemy missiles right in the air. Eventually, the project was abandoned as the development and manufacturing of the laser projection system had become too expensive and unnecessary.  Two LT1K1 Spektr's were tested and after that, one is scrapped and the other one is being displayed in the Army Technological Museum in Cinigrad.

Project DRAKON was part of "Pregrada"'s Theater Missile Defense Program. The project included developing hit-to-kill technology and demonstrating the guidance accuracy of a small, agile, radar-homing vehicle. This project contributed to the creation of S-400 mobile SAM and the anti-missile defense fitted in Morskoi Projekt 021983/Scinfaxi.

VOSTOK was a project commissioned in 1984 to develop a supergun which projectile could reach orbital altitude and destroy enemy satellites, this program was Yuktobania response to AGB intelligence report about an Osean top secret "Orbital Gun" project. 3 early prototypes were made and tested in a disclosed testing facility in Jilachi Desert. The first 3 prototypes (Codename: Zmey, Smok, Lamya) which had 410mm cannons, were tested sucessfully. A 180 kg Projectile fired from "Zmey" at 3,600 m/s (12,000 ft/s) reached the altitude of 820,210ft before descended safely into a safe zone in the middle of Ceres Ocean. The second batch of cannon proposed just a month after the test. The cannon that'd be named "Otkroveniye" would have a massive 600mm cannon with a barrel length of about 60 metres. Eventually, the project was discontinued and a part of "Zmey" gun can be seen now in Museum of Army Technologies in Cinigrad.

According to declassified Yuktobanian Military documents, after its completion "Otkroveniye" was planned to be mounted on Cruik Fortress.

In 2013, Yuktobanian government announced that Morskoi Projekt 031984 will be resumed and converted for scientific purpose.

L-1 is a hybrid surface combatant and submarine first proposed in 1985 by a Yuktobanian destroyer captain Maxim Tsigler. The inspiration came when his destroyer "Olen" set sail from its homebase in Port Arkhangelsk and at the same time a Kilo class submarine submerged nearby their position and sail side by side. He conceived of an entire destroyer able to submerge and thus ensure secrecy in the event of nuclear war. His original proposal of a submersible frigate was rejected due to the impossibility nature of that project. Eventually, he came up with the idea of submersible missile corvette which would share similar design with Sarancha class missile boat. The proposal came into approval and L-1 came into active service until now.

L-1 is armed with 1x76mm Kostya gun which can be extracted into the ship's hull, L-1 is also capable to carry 2 P-120 Malakhit anti-ship missile, or in time of nuclear emergency it can also carry a JL-1 SLBM.

UYR: 15 L-1 still in active service by 2008 and all of them served in Yuktobania's Black Sea Fleet.

SU-133 Volos was a proposed twin-engine semi-hypersonic interceptor. The original design was proposed by Edmund Ustinov, a briliant aircraft engineer who worked for SU design bureau. Volos was powered by two incredibly powerful Al-32X experimental high bypass turbo ramjet. He claimed that this aircraft could respond rapidly to any dangers or emergencies. 2 prototypes were made and tested at a secret testing facility somewhere in Yuktobania, the protorypes performed well on their flight tests although the engine couldn't reach the speed wanted by Ustinov. But, then they discovered a very serious problem that'd determine the fate of the entire program. On its last flight test, Lieutenant Colonel Andrej Gerimov was doing another attempt to reach the intended speed when suddenly the aircraft banked and went out of control. This problem would later be known as "Chroming"

The STS-A Bastion (Yuktobanian: Sverkhtyazhelyy Transportnyy Samolet Amfibiya) is a super-heavy amphibious cargo aircraft originally proposed for civilian usage but eventually approved as a military project under "Pregrada". It is powered by  six next-generation turbofan engines is the largest airplane in the world; it is the heaviest aircraft with a maximum  takeoff weight of 2,500 t (5,500,000 lb), Four times heavier than the AN-225. STS-A enormous size means it could carry more troops and military hardwares in a single flight than any other transportation aircrafts, and its water-landing and take off capability means it could land on waters nearby hostile territory and waiting for order to launch sudden attack. In 1990, a smaller prototype codename "Feya" was built, and in February the prototype which had the same size as OADF's C-130 made its maiden journey from a military airbase nearby Okchabursk to the homebase of Yuktobanian Navy's Ceres Fleet in Svetlyak Naval Base. The project was discontinued in 1995 when Yuktobania diverted all of its military resources for war effort in Belka. In 2010, Beriev Aviation Design Bureau announced that they will revive the project with the assistance of foreign partners 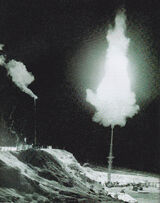