Gazelle replying to HQ after order him to withdrawNegative, sir

Samuel "Gazelle" Everest, callsign Gazelle. A proud, boastful pilot of the Erusean Air Force, well-liked by his peers for his friendly and outgoing nature and a witty sense of humor. Samuel got his TAC name as kind of an ironic joke. Being of relatively short stature, heavyset and slow for a fighter pilot, he could never be described as someone fast or graceful. He found it amusing and the name stuck. However, the name proved to be completely apt when as soon as he got behind the stick of a fast fighter like the Strike Eagle, as his plane could dance in the sky with skill and grace. He was no prey animal either, being an adept combat pilot capable of keeping up in a dogfight with more veteran pilots by reading their movements and adapting to their tactics quickly.

Samuel's squadron originally flew only air-superiority missions with the F-15C, although they were re-equipped with the F-15E sometime in 2015 and re-trained for the use of air-to-ground weaponry as a way of increasing tactical flexibility, as they could easily transition from a ground attack role to establishing air superiority and vice-versa. Samuel had a natural talent for this, using the speed of his aircraft to carry out fast bombing attacks and hit-and-run strafing runs on enemy positions. When the war began and he was sent to the front, he became infamous among the Osean troops for his precise bombing attacks, raining death over them while single-handedly fending off any interceptors. He particularly liked to participate in nighting bombing raids. He often joked about enjoying the light show of the bomb exploding on the ground and the subsequent fires illuminating the dark skies. His highlight of the war was on July 16, during the attack of Osean forces on San Salvacion called Operation Shotgunner. An Osean night attack on the Erusean troops in and around the capital city of San Salvacion took them by surprise, but a massive counterattack spearheaded by Erusean squadrons and supported by MQ-99 UAV located around the city stopped the offensive. Samuel and his squadron provided precise and deadly close air support against the Osean armored troops utilizing their Self-Forging Fragment Submunition bombs, nicknamed "popcorn bombs" by the troops on the ground due to the noise of the multiple bomblets exploding at different intervals. The Osean army was routed, sustaining some of the worst attrition rates of any Osean operation during the war.

Just a few days later, om July 22, Samuel took off on a solo mission to attack straggler Osean troops still fighting and refusing to surrender east of San Salvacion. With a full load of Self-Forging Fragment Submunition bombs. Samuel was confident, as the chances of encountering enemy resistance in the air or significant anti-aircraft fire were minimal. However, as he headed towards his target he received a radio transmission, redirecting him south towards Artiglio port. Osean planes of the 444th Squadron, "Spare" had launched Operation Three of a Kind, an attack on fuel storage facilities and refineries in the port city, as well as the oil tanker ships and the battle raged on above Artiglio. The weather was quickly getting worse, as the tropical storm Inessa 2 had formed recently in the ocean and was approaching the area of operations. The approach of the storm made the Erusean command wary of sending more pilots into the area, sending a retreat order to all fighters, expecting that the Oseans would also pull out from the area instead of risking the loss of planes and pilots in the storm.

Fuel tanker trucks were loaded with the remaining gasoline and sent out hoping to use the storm as cover. It is known that some trucks had been secretly loaded with a shipment of experimental Helios missiles that were about to be sent to Tyler Island when the attack occurred. Whether the rest of the trucks were meant as just decoys or if their fuel was considered strategically important enough is unknown. Much to the surprise of the Erusean command, however, the Oseans not just were ordered to stick around, but targeted the trucks hiding in the sand clouds, something considered suicidal under most circumstances. MQ-99 UAVs were immediately launched, as command was not concerned about losing them in the storm. Observing their radar screen, however, they realized that the drones were not the only ones still heading into the area. Samuel, disregarding the retreat orders, had maintained course and joined the swarm of drones entering the combat zone. Like the Oseans, he was not worried about the damage the sand could inflict on his plane, and believed that attacking the Spare Squadron fighters in such a bad weather was in his advantage, being used to fly in poor visibility conditions.

As he expected, the drones wreaked havoc among the Spare Squadron planes. Gazelle, believing the situation was under control, attempted to intercept the plane with the "Three Strikes", believing him to be the leader of the squadron, utilizing the support of drone aircraft. This was not nearly enough to match the skilled Osean ace, who shot him down above the sand storm shortly after. Losing control, Samuel attempted to bail out at low altitude to avoid being swept away by the sandstorm's air currents. His landing was fairly violent, but successful, allowing him to survive with only minor injuries. Realizing he wouldn't survive for long in the desert storm breathing sand dust and with almost zero visibility around him. After the storm passed, the rescue team try to find him but was never found and currently mark as "Missing in action" 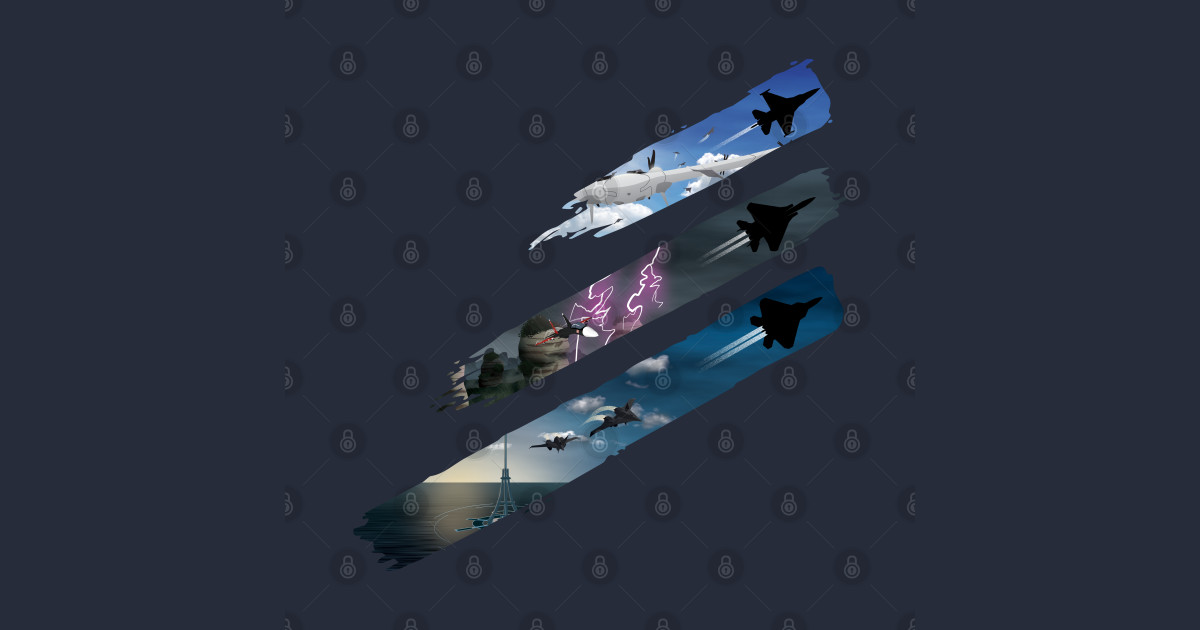