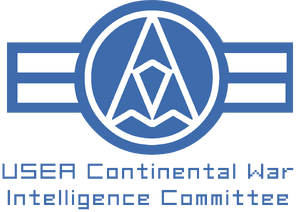 The USEA Continental War Intelligence Committee (CWIC) was an international intelligence organization within the Independent State Allied Forces. The CWIC was staffed by civilian employees from many state intelligence agencies, most notably Erusea and Central Usea.

The group was founded as the ISAF Anti-Terrorism Task Force (ATTF) to investigate terrorist attacks in and around Erusea during the latter half of the Continental War. The task force worked with the ISAF Army to shut down the Erusean Liberators terrorist group.

After the war, the group reformed as the CWIC and worked to collect all information regarding the Continental War for public release. The CWIC also continued its anti-terrorism efforts, including working with the ISAF to quell the first Free Erusea rebellion.

When the ISAF was merged into the IUN, the CWIC's objectives and members folded into the IUN's central intelligence-gathering efforts.

On May 3, 2005, around 21:52 local time, Air Ixiom Flight 638 attempted to land at San Salvacion's San Profetta Airport. The aircraft's front landing gear snapped off, forcing the pilots to perform a belly landing. The landing was successful with no major injuries aboard the aircraft. News outlets reported, and state media later confirmed, the Erusean supreme commander was on the flight. Analysis of the front landing gear indicated that it was tampered with, but there wasn't sufficient evidence to suspect or arrest anyone. No known terrorist group had claimed responsibility; the Falcons of Dawn were widely believed to be behind the attack, but they denied any involvement.

Later that month, on May 26 at 09:38 Erusean Standard Time, a bomb exploded at the foot of Johnson Memorial Bridge in Farbanti. The bomb was planted inside a commercial truck, which, upon further inspection, had stalled at the foot of the bridge. The bridge was closed at that time for minor construction work with Farbanti City Police supervising, so FCP (along with emergency medical and fire services) immediately converged on the scene and arrested three civilians attempting to escape the area. One of them turned out to be innocent, but the remaining two, Erusean citizens but sympathizers of ISAF, were found guilty of planting the bomb and attempting to blow up Johnson Memorial Bridge. Their plan was to ram the truck through the construction barricades, plant the bomb, and run across to the other side to destroy the bridge in hopes of easing ISAF's operations to take the capital. Had their plan even worked, it would still be four months before ISAF would reach the city. The bomb caused minor damage to a nearby apartment building, and killed two civilians and injured five others who were near the truck at the time of the explosion.

On June 1 around 22:03 local time, three gunmen entered Delarus Community College and performed a mass shooting against the students, many of whom were Erusean or of Erusean descent. Three students were killed and 20 more were injured, 4 critically. Other students and teachers managed to subdue the gunmen and hold them in custody until Delarus Police arrived. All three gunmen were arrested and found guilty of various crimes, including murder and attempted mass murder. These gunmen were identified as ISAF sympathizers as well.

On June 2, ISAF President Robert Sinclair, who had not commented on the Johnson Memorial Bridge incident up to this point, held a press conference from North Point condemning the attacks on both Johnson Memorial Bridge and Delarus Community College. He announced the formation of the ISAF Anti-Terrorism Task Force, which would be comprised of members of the intelligence committee from multiple ISAF member states, in order to "track down and destroy any traces of terrorism that believes it is helping our cause". Speaking directly to Erusean citizens, he stated that "[ISAF is] at war with your military officials and those who believe that this continent should be ruled by one country. We are not at war with you or your fellow civilians."

On June 3, the ATTF began operations. They collected data from within ISAF as well as analysis of events prior to the attacks, including the Air Ixiom incident, and discovered the existence of a terrorist organization calling itself the "Erusean Liberators", whose main base was a set of underground tunnels south of Delarus. The ATTF immediately formed a group of ISAF soldiers intended to raid the base and kill anyone associated with the organization. It was also discovered that the Erusean Liberators would all be in the base on dates where ISAF performed major air operations, especially those including their ace pilot, Mobius 1, likely to celebrate and create new plans. The ATTF requested ISAF to provide them with the date of their next operation, but ISAF was not planning any major operation until July 10. The ATTF's group of soldiers, known as the 1st Infantry "Altor" Unit, were put on standby for the time being.

On June 17, ISAF discovered that Erusea was planning an imminent cruise missile attack against ISAF ground forces at the northeast of the continent. Mobius 1 was dispatched to the area and put on standby, and the ATTF was informed of the situation. The ATTF's Altor Unit was dispatched to Delarus and put on standby as well. On June 18, the missile attack began. Mobius 1 took off at the same time as Altor Unit began operations and infiltrated a secret tunnel entrance within the city. The unit made contact with and killed every Erusean Liberator they made contact with, eventually reaching their leader, whose name has never been released. The Liberator, as media reports have dubbed him, was equipped with a suicide bomb and detonated it as soon as the Altor Unit reached the central room. One Altor soldier was injured in the blast, and the unit was forced to retreat. The blast caused the street above to partially collapse, but no civilians were injured. Half an hour later, the unit re-entered the tunnels and cleared all of the passageways.

Later that day, ISAF President Sinclair held another press conference from North Point, confirming the organization's existence and destruction. He confirmed that the ATTF would still be active, in case of any further threats.

The ATTF remained inactive throughout the rest of the war. In December of 2005, as ISAF began working to implement an interim government within Erusea to help stabilize the country, some Erusean citizens met with ISAF President Sinclair to discuss a release of all materials concerning the war for full transparency from the organization. Sinclair agreed, and decided to re-organize the ATTF as the USEA Continental War Intelligence Committee, even going so far as to invite members of the Erusean intelligence committee to join in their efforts.

In March 2006, the Intelligence Committee discovered the existence of the rebel group Free Erusea, and informed ISAF's leaders, who would form Operation Katina to quell the rebellion.