One notable aspect of the squadron is that they accept foreign pilots, which allows the local ones to interact and share their ideas whether in combat or not.

The squadron was formed in 1973 as an air defense squadron flying F-4E Phantom IIs at a time when tensions between Osea and Yuktobania were at an all-time high. In 1989, they transitioned to F-15C Eagles. They were stationed at McNealy Air Force Base even up to the present.

During the Belkan War, the squadron was assigned to Oured in the event that Belkan air squadrons would bomb the city. They returned back to McNealy following the Treaty of Lumen.

After the 2004 elections, Vincent Harling promised sweeping changes to the military. This affected the Warowl Squadron as it was deactivated shortly after the changes took effect.

Following the events of the Circum-Pacific War, the squadron was reactivated by orders of President Harling as a covert fighter squadron. Though still stationed at McNealy, they would head out to other bases to take out any remains of the Grey Men. In late 2021, command of the squadron was handed over to the recently-promoted Chihaya Itsuka, a selected Emmerian transfer pilot.

The squadron experienced much action during the Dimensional Crisis. Their first known battle was in Cape Landers where a Grey Men-affiliated strike force attacked the Warowl Team in an effort to locate and retrieve a certain figure. The sheer number of Belkan fighters caused the team to lose three planes, leaving Itsuka and Orimura as the only members active. Thanks to the Aurelian Air Force's Gryphus Squadron, which also has two members before the encounter, they beat the Belkans in their home turf. Shortly after, they flew together in missions beyond the Osean continent.

Their first known sortie under Operation Guardian Angel began during the raid in a facility in the Waldreich Mountains, escorting members of Sea Goblin to steal vital data regarding the Grey Men's battle plans, which ended successfully. 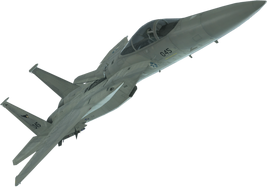